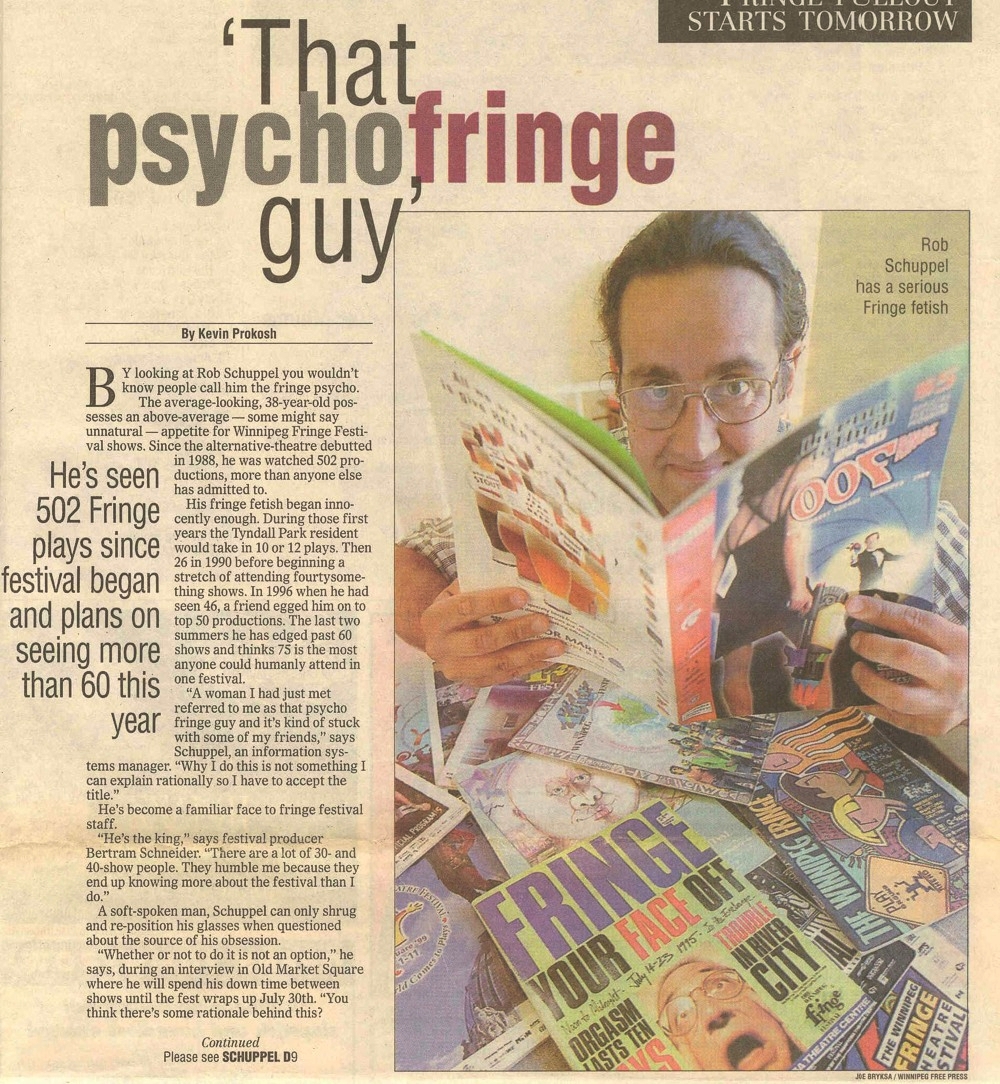 WINNIPEG, JULY 29, 2001, 11:00 PM -- The final attendance numbers for the Winnipeg Fringe Theatre Festival totaled 127,869, setting a new attendance record for the 11-day event. Indoor admissions were 61,555, up 9,000 over last year and marking the fourth consecutive record year for the Festival.

"All I can say is thank you -- to the performers and the patrons who continue to embrace and support this Festival with unbridled enthusiasm," remarked Bertram Schneider, Executive Producer of the Winnipeg Fringe Theatre Festival. "The continued growth and success of the festival is a tribute to the quality of productions that artists are mounting on our stages, and to an ever-growing audience that is responding to the fact that the Fringe offers something for everyone. The significant increase in our numbers this year is due to indoor admissions, which proves that people are making the decision not only to come down to Old Market Square to enjoy the Outdoor Stage, but taking the next step and checking out some of the indoor productions. It's been a very exciting week."

From July 19-29, 61,555 people saw indoor performances, exceeding the previous indoor record of 52,549 by 17 per cent. A total of $381,459 in box office revenue was returned to the performers, up by $69,000 over last year. 63,377 people took in the wide variety of entertainment that was presented each day from noon to midnight at the Outdoor Stage in Old Market Square. There were 122 sell-out performances. 1,164 Frequent Fringer Cards were sold while sales of advance tickets increased by 20 per cent over last year. 2,937 children enjoyed the expanded Kids Fringe throughout the 11 days.

The Fringe would not be possible without the help of a dedicated group of 670 much-appreciated volunteers donating hundreds of hours of their time during the event. The Fringe would also like to thank all of its sponsors and funders for their generous support of this year?s Festival.

The winner of the du Maurier Arts Playwriting Challenge was announced this afternoon at a staged read-through of the winning play. The top play, as judged by a panel of local theatre professionals, was Doug and Betty by Sharon Bajer. Bajer, a local Winnipeg actor and director, received a cheque for $1,000. Second place was awarded to Richard Kellie for Boxes, and third prize to Terrie Todd for Sleeping with a One-armed Man. Honourable Mention went to Corey Redekopp for The Truth Is and Marvin Francis for The Electric Pow-Wow Circus.

Fringe diehard Rob Schuppel won the Ultimate Fringe Survivor Challenge seeing 62 shows over the last 11 days. Schuppel is rewarded for his survival skills by receiving a SuperPass for the 2002 edition of the Festival.

Fringe Festival organizers are also pleased to announce that several shows will be held over this week at the MTC Warehouse Theatre, 140 Rupert Avenue. Performances of Fitch and Cabbage -- Gentlemen of the Road (Screwed & Clued), Are you There God, It?s Me Justin (Spleen Jockeys), Baggage Claim (freefall) and Life Is a "B" Movie (Happy Phantom) will take place from Wednesday to Friday (August 1 - 3) of this week.Tickets for all performances are $8.00 and are available at the door one hour before show time. A detailed schedule of performances is below. For more information, please call 956-1340.

Written by Kris Joseph originally for his CBC Performer Blog:


Outside Kafka And Son, shortly before noon today, I met the man who I consider (so far) to be the most hardcore Winnipeg Fringer in existence. I approached him eagerly, because he was the kind of audience member who had already sprung for the "20 Years to Life" t-shirt, and offered him a flyer for The Churchill Protocol. He beamed at me and exclaimed You're on my list and we're coming to see you this afternoon!

"Thats great!" I said, as I warily watched him reach around to his back.

"Check it out, he added, whipping a very large ziploc-style bag from some invisible rear pouch. I have a system!"

His colleague, who had remained silent to this point, couldn't help but chime in. Wait until you see this, he chided as he finished munching on a hot dog from the vendor outside the MTC Warehouse. "We dont call him the Psycho Fringe Guy for nothing."

In the plastic bag, Psycho Fringe Guy ("Um, he prefers 'PFG'," his friend helpfully added, after a stern glare from PFG) had stashed his Official Fringe Guide (never shall it be bent or creased) and a print-out of his itinerary. He pointed out that he had only put print-outs of the next couple of days worth of shows into the bag, since things may change at a moments notice. He showed me his exhaustive list of show selections. Each of them was annotated with a listing of the time the tickets went on sale, the performance start time, and the finish time. The list was optimized to minimize travel time between venues, while maximizing the number of performances that could be seen. "I saw 60 shows last year, he said. I think I can do better." As I picked my jaw up off the ground, he added, "and all of this is on the web, too, so my friends can see where I am and what I'm doing and can join me if they want. We have several web sites, and they're all linked together."

I was flabbergasted. Really, how much more hard-core can a Fringer be? How many mortgages do you have to have on your home in order to be able to afford all those tickets? I thought about this, and then suggested that the next logical step in his evolution is an ankle bracelet with a GPS transmitter that his friends could use to track him in real time on the web. Imagine the fun he could have if his exact location could be found on the Internet at all times! If word were to get out that PFG was going to see more than 60 shows, artists would be all over him. They'd be playing "Hunt The Psycho": using the CBC Web Cell as a base, chasing him down to hand him flyers for shows that he might want to add to his ever-growing list. It could be fun for everyone!

"That's pushing it a little bit, he squirmed after I excitedly offered my suggestion, and I dont think I like the title of the game. But I have to admit that the idea has some merit.

If you think youre more hard-core than PFG, track me down and prove it to me. I think Mr. PFG is a pretty tough act to follow, but I have been consistently amazed at the passion that people apply to their Fringe-going experiences. Here's to you, PFG, and everyone like you — you rock my world!